In the last couple of years demand for higher education has trended down, with enrolments falling slightly in 2018 compared to 2017. This post explores some reasons why this might be happening.

Demographic trends are always important to enrolments and participation rates.? Unfortunately no data source tells us in total or by age how many people meet the eligibility criteria for a Commonwealth-supported place.

The size of the birth cohort has a significant influence, but under-counts eligible persons due to migration. With?22 per cent of domestic students born overseas migration is important to demand.?ABS demographic data includes migrants, but because of long-term temporary residents over-states how many people are eligible for a CSP.

As universities generally require students to have completed Year 12, final year of school enrolments are also a guide to potential demand. However, this is also an imperfect indicator, due to temporary migrants and not all Year 12 students taking subjects that qualify them for university entry.

With all these caveats, the chart below shows that none of the potential population indicators suggest that, holding participation rates constant, that demand for higher education should be up in aggregate terms. The (temporarily) falling size of the birth cohort and the slight dip in Year 12 students would suggest that demand might trend down. 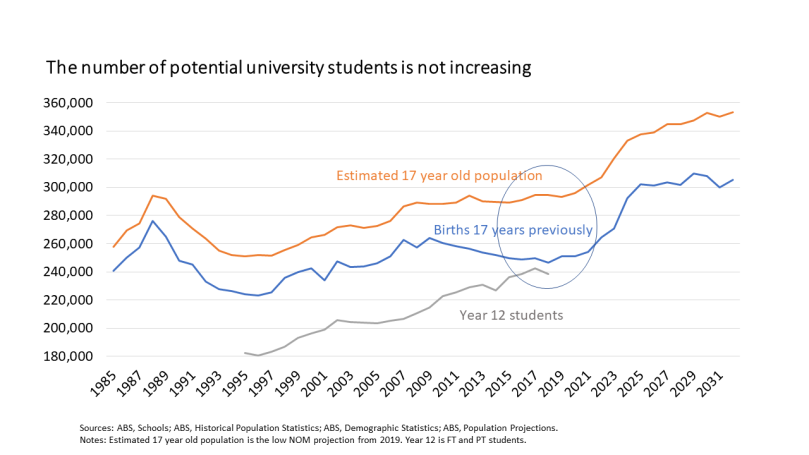 END_OF_DOCUMENT_TOKEN_TO_BE_REPLACED

The 2018 higher education enrolment data, published yesterday (yes, it should be released much earlier than late October), showed a rare fall in public university domestic commencing bachelor degree students. Both a headcount and full-time equivalent count show a decline of about 0.8 per cent compared to 2017.

2018 was also the first year post the demand driven system, the practical implication of which was that universities would not be paid Commonwealth contributions for enrolling additional students. Indeed, there is a financial incentive to let the number of student places fall.

So is this cause and effect, with changed funding rules causing enrolments to decline? I have no special insight into the strategic decisions of universities, but overall this trend looks to be driven by weak demand more than an unwillingness to supply student places.

As the chart below shows, applications trended down in 2018 and 2019 and offers (willingness to supply) followed this trend. Offer rates were stable: 83.2 per cent in 2017, 83.8 per cent in 2018, and 83.6 per cent in 2019. If universities were actively trying to reduce numbers we might expect offer rates to go down, but this isn’t happening.

END_OF_DOCUMENT_TOKEN_TO_BE_REPLACED

In August, although I only noticed it yesterday, the OECD published a report on work-related training in Australia relevant to my recent blog posts. It has a couple of data sources I had missed that confirm the declining use of some forms of training.

The HILDA survey has a question about whether employed respondents have undertaken any education or training. Based on the questionnaire, it could have been higher education, vocational education or unaccredited training but it has to be ‘structured’. So it would not include short online self-education.

As the chart below from the OECD report shows, the proportion of workers undertaking any type of training has declined. From peak to trough, the proportion participating in structured learning for work over the previous 12 months has declined by about 5 percentage points. 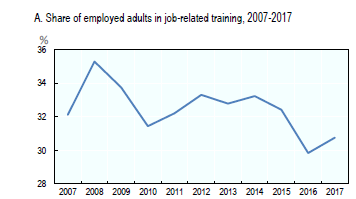 I don’t have access to HILDA data, but it has several questions related to the purpose of the training that could help us understand what is going on (recalling that NCVER data suggests that training for the respondent’s current job is declining more than for a new job or promotion). END_OF_DOCUMENT_TOKEN_TO_BE_REPLACED

A couple of weeks ago I posted on the surprising apparent decline of reskilling and retraining. Mature-age undergraduate, postgraduate, vocational qualification, ABS work-related training, and ATO self-education expenses have all trended down in recent years. These trends did not seem consistent with the oft-repeated claims of workplace change and the need to reskill and retrain.

In a recent Pearson global survey of learners, employed respondents who required further training were asked how they did it. In Australia, organised courses or training are still more widely used than online self-education. But a third of the sample had used this method (chart below).

END_OF_DOCUMENT_TOKEN_TO_BE_REPLACED

We are regularly being told that in an era of technology-driven labour market change we will need to reskill and retrain much more than we did in the past. Perhaps we will. But it is hard to find evidence for this in the available data.

Let’s start in higher education. As I have noted before, mature-age undergraduate education is trending down. But domestic postgraduate coursework commencing student numbers are also down on their 2014 peak, as seen in the chart below. Education and business courses are driving the decline. Only health and IT courses have enjoyed enrolment increases since 2014.

Total student numbers are still high by historical standards. But with?record numbers of eligible students (people who already have degrees), and undergraduate initial professional entry courses being converted into postgraduate qualifications, we would expect strong growth in this type of qualification. It is not happening.

The English language abilities of international students keep coming up as an issue. Despite reassurances from the regulator and universities, there is little publicly-available evidence to support a conclusion that the language issues are too infrequent or not serious enough to be a major concern.

Although we should always be careful with statistics on self-assessed abilities, they can provide a rough guide. If someone says that they do not speak English very well chances are that they will struggle in an English-speaking university.

One source of data on self-assessed English is the 2016 Census. The Census does not directly identify people on student visas, but I have used a number of filters – enrolled full-time in university, non-citizen, and arrived in Australia 2014-2016 – to identify likely international students. I also removed people who are monolingual English speakers. It’s likely that the data still includes some visitors to Australia and domestic students, such as those on humanitarian visas, but it should be dominated by international students.

END_OF_DOCUMENT_TOKEN_TO_BE_REPLACED

As the latest OECD Education at a Glance publication confirms, Australia is a high tertiary education attainment country. But large-scale migration makes it hard to interpret Australian figures – what is the result of policies aimed at educating Australian citizens, and what is due to our commercial international education industry and skills-based migration program?

The chart below attempts to break the numbers down a bit further, although the categories are not straightforward.

Education and Work separately identifies people on a student visa, which it puts at 142,000 in 2018 (80 per cent with overseas degrees). I have deducted these from the other non-citizen categories. As postgraduate international enrolments have been growing more quickly than undergraduate in recent times, I expect this category to grow in future years.

In Education and Work, the ABS continues its irritating standard practice of not identifying permanent residents, who are entitled to a Commonwealth supported place and to remain indefinitely in Australia. There were Malaysia trusted gambling website in 2017. This means the ‘non-citizen with an Australian degree’ category is a mix of them (after they graduate) and former international students on temporary or permanent visas. With increasing numbers of completing international students getting 485 visas, I expect that this will be a growing category.

What I find most interesting in this data is the very large number of people with overseas degrees – more than a million in total. About 45 per cent have have taken out citizenship. Most of them would be the product of Australia’s skilled migration program, although there were also 58,000 New Zealand citizens, who can come to Australia without going through the usual visa system, with an overseas degree.

On right-hand side of the second chart I have a column ‘migrant citizen with an Australian degree’, representing just over 700,000 people, that in the first chart appears in the ‘domestic’ time series. Most of them, I think, would have been domestic students (just under half arrived in 1996 or earlier), but some largish proportion would have been people who arrived as international students and subsequently became citizens.

Back to top
Andrew Norton
Blog at WordPress.com.